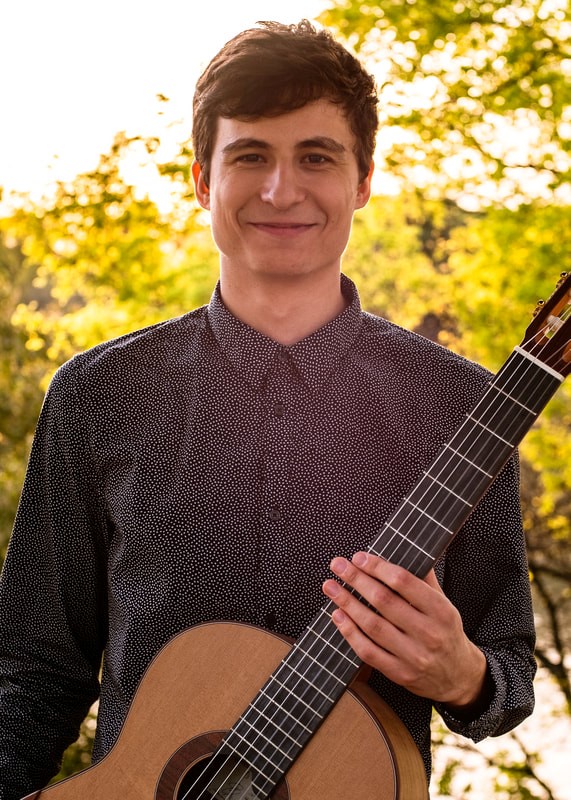 “Dragos is a narrator who uses the guitar to tell a story from his captivating, thoughtful perspective.” – Lorenzo Micheli

“Beautiful tone, sensitivity and great musicianship. Dragos has a wonderful command of our instrument! A bright present and even brighter future.” – Rene Izquierdo

Romanian guitarist Dragos Ilie has already established himself as one of the most creative and expressive young guitarists of his generation. At an early age, Dragos fell in love with the guitar after listening to his father play. Soon he enrolled at the Popular School of Arts and later the National College of Arts in his native city (Iasi), in the class of Professor Marius Timpau. During that time, Dragos also studied with Dr. Daniel Dragomirescu at the National Music Conservatoire of Iasi.

His dedication for the art led him to receive numerous grants in his home country for competing at festivals and competitions across Europe. Among these include the MOL Foundation Scholarship for  Young Artists and the “Young Talents” Grant offered by the Margareta Principess Foundation, with the support of the Royal House of Romania.

Dragos has placed in over 35 national and international competitions, having receivev more than 20 first prizes. Some of these include the Iasi Guitar Festival, Indiana Guitar Festival, the Columbus Guitar Symposium, ECU Guitar Festival, Texas A&M Guitar Competition, and Florida Guitar Festival. He has performed and taught masterclasses at various festivals around the United States and Europe.

After recovering from a long term music-related injury, Dragos has been deeply invested in the study of Body Mapping, technique that focuses on body awareness and injury prevention for musicians. Currently, he is under training for becoming a licensed practitioner.

Dragos holds a Bachelor Degree in Music Performance from the Schwob School of Music at Columbus State University, where he was the recipient of the Woodruff Award: a prestigious four year scholarship for completing his studies at the class of the acclaimed teacher, composer, and performer Andrew Zohn. He is currently pursuing a Master’s Degree at the University of Austin Texas, serving as Teaching Assistant for the guitar studio, led by one of the most prestigious figures of the classical guitar, Adam Holzman.

Dragos is an Augustine Strings Artist, performing on the Red Paragons.