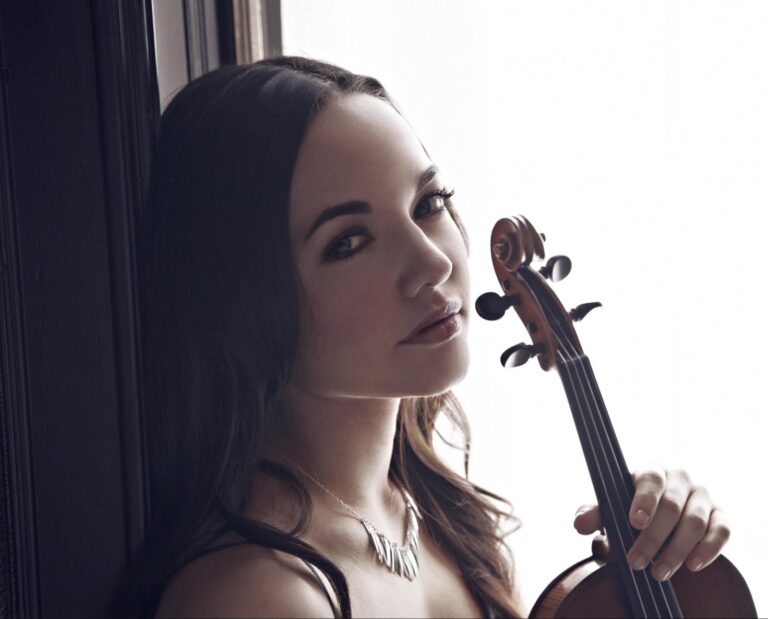 A violinist praised as playing “gorgeously” and with “gracefulness and easy rapport” (The Boston Globe), violinist Emily Daggett Smith performs regularly as soloist, recitalist, and chamber musician. Her performances have taken her across the United States, Europe, South America and Asia, and she has been described as playing with a “very beautiful tone” (The Gathering Note) and “irrepressible élan” (The Seattle Times).

Highlights of the 2020-21 season include performances of Bach’s Violin Concerto in E major with Lionel Party for the Lenape Baroque-Fest, Mendelssohn’s Violin Concerto with the National Music Festival Orchestra, and a series of solo violin recitals at the University at Albany’s Art Museum, which includes two new commissions by composers Andrea Cassarubios and Gabrielle Herbst. Her critically acclaimed performances as part of the Beethoven For One series of the complete Beethoven String Quartets in New York City in November, 2020, was hailed by the New Yorker : “I’ve heard Beethoven performed in large and famous concert halls by some of the great quartets of the era (including the Juilliard, the Emerson, and the Takács); none came close to delivering the jagged immediacy and breathtaking intimacy of Saturday afternoon’s quartet … The greatness of these not-yet-famous musicians was revealed and exalted in closeup … For me, “Beethoven for One” stands as an ideal and a corrective to the usual run of classical concerts, even after they’re able to resume” (Richard Brody, The New Yorker).

As a soloist, Dr. Smith made her New York concerto debut at the age of 21 in Alice Tully Hall, playing the Beethoven Violin Concerto with the Juilliard Orchestra and conductor Emmanuel Villaume.  Since then she has performed concerti with many orchestras including Iris Orchestra, Festival Mozaic Orchestra, New Amsterdam Symphony Orchestra, and the New York Classical Players. She has performed solo recitals across the country at venues including the Kennedy Center’s Terrace Theater, Music in the Loft in Chicago, and Washington Performing Arts’ “Music in the Country”. As a concertmaster of the Juilliard Orchestra, she worked with renowned conductors including Michael Tilson-Thomas and Leonard Slatkin, and has appeared as guest concertmaster of orchestras including Iris Orchestra, The Orlando Philharmonic, and The Knights.

An avid chamber musician, Dr. Smith has shared the stage with many renowned musicians including current and former members of the Cleveland, Emerson and Juilliard String Quartets. Her performances have taken place at some of the world’s greatest halls including Carnegie Hall, Alice Tully Hall, the Shanghai Grand Theatre and the Vienna Konzerthaus, and have been featured on PBS’s national broadcast Live from Lincoln Center, NPR’s From the Top, Classical King FM in Seattle, WQXR in New York, and WWFM The Classical Network in New York and Pennsylvania. She has appeared at festivals including Caramoor, Ravinia Steans Institute, Ravinia Festival, Rockport Music, The Seattle Chamber Music Society, and Tanglewood.

In addition to performing the masterpieces of the 17th through the 20th century, Dr. Smith is also a strong advocate of new music. She has premiered dozens of new works, including the world premiere of Dan Visconti’s Silvertone which was commissioned for her debut recital in Chicago. Her extensive work as a member of The Knights also speaks to her passion for an organic blend of old and new music, and as the founding first violinist of the Tessera Quartet, she recorded a world-premiere album of Harold Brown’s complete works for String Quartet on Albany Records.

Despite her busy performance schedule, Dr. Smith is dedicated to education and maintains various teaching and outreach activities. She has served on violin faculty at the Bard College Conservatory Pre-College and the Juilliard School, where she is assistant to Laurie Smukler. She also served on the Violin faculty of the undergraduate department of Stony Brook University and has appeared as faculty and given masterclasses at summer festivals including the National Music Festival, the Manchester Music Festival, and Greenwood Music Camp. One of the most rewarding musical experiences of her life was teaching, giving masterclasses, and performing with young musicians in the la Red music program in Medellín, Colombia over two consecutive years as part of Medellín Festicamará.  Her teaching style is one that blends and deepens the traditions of her great teachers Soovin Kim, Philip Setzer, Joel Smirnoff, Laurie Smukler, Masuko Ushioda, and Donald Weilerstein.

Dr. Smith has received numerous awards and scholarships.  She is a winner of the Juilliard Concerto Competition, the SYLFF Fellowship, the Brockton, Newton and Waltham Symphony Concerto Competitions, and the Gold Medal at the Fischoff International Chamber Music Competition in the junior division.  She holds Bachelor and Master of Music degrees from The Juilliard School, and as a recipient of the prestigious Staller Scholar Award, recently completed her Doctor of Musical Arts degree at Stony Brook University. She plays on an 1801 Johannes Cuypers violin, which was generously donated by Dr. Marylou Witz.