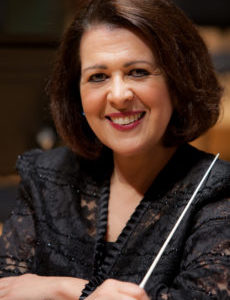 Described by her colleagues as “a musician who will energize an ensemble like no other conductor, Georgia brings excitement and love for music from the podium that is truly amazing. The results of her work can be seen in the students she teaches; she encourages them not only to become better musicians, but better people as well.”

Georgia Ekonomou is the Artistic Director and Conductor for the Atlanta Junior Chamber Orchestra, Southern Division Representative to the NAfME Council for Orchestral Education, former advisory committee member for the Midwest Band and Orchestra Clinic and former member of the ASTA National Membership committee.

An active conductor, she has appeared with the Georgia Tech Orchestra, the Atlanta-Emory Orchestra, the Georgia University Orchestra, the Agnes Scott Chamber Orchestra, the Intermediate Symphony Orchestra of the Interlochen Summer Music Festival. Additionally, she has conducted numerous All State Orchestras, State and County Honor Orchestras and Summer Music Festival Orchestras. She is the former Director of Orchestras at The Paideia School and The Lovett School in Atlanta, Georgia. Her groups performed at the 1990 MENC National Conference in Washington, DC; the 1997 GMEA Conference; and at the 1997 International Association of Jazz Educator’s Conference. Her groups consistently received Superior ratings at State and National competitions.

Ekonomou has been a String Educator and Conductor for 40 years. Her educational background includes a Bachelor of Music Education from Northwestern University and a Master of Music Education from Georgia State University. A violinist, she has performed with the Atlanta Opera Orchestra, the Woman’s Jazz Orchestra of Los Angeles, the Atlanta Ballet Orchestra, and the Emory Chamber Players.