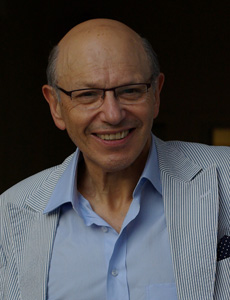 Professor of Violin at the Indiana University Jacobs School of Music, Visiting Professor at the Kronberg Academy, Visiting Professor at the Rena Sofia School in Madrid, Spain and International Chair for strings at the Royal Northern School of Music in Manchester, England, Mauricio Fuks began his violin studies in his native Uruguay with Ylia Fidlon, a pupil of Leopold Auer. After graduating from the Juilliard School of Music, where he studied with Joseph Fuchs and Ivan Galamian, he furthered his studies at the University of Southern California with Jascha Heifetz.

In 1964 he won 1st Prize at the Young Concert Artists Competition. Following a distinguished international career as concertmaster, chamber musician and soloist, he now devotes himself entirely to pedagogy.

Fuks has been a visiting professor at the Yehudi Menuhin School in England, the University of Limerick in Ireland, and the Hochschule fur Müsik “Hanns Eisler” in Berlin.

He is regularly invited to give master classes at the Reina Sofia School in Madrid, the Scuola di Musica in Fiesole, the Royal Conservatory in The Hague, the Baratt-Due School in Oslo, the Royal Academy of Music in London, the Conservatoire National Supérieur de Musique in Paris, as well as the Shanghai and Beijing National Conservatories. He has participated in summer festivals such as the Salzburg International Summer Academy of the Mozarteum, the Britten-Pears School for Advanced Studies in Aldeburgh, the Aurora Music Festival in Sweden and the Verbier Festival in Switzerland. He continues to teach at the Sarasota Music Festival, the Orford Summer Festival in Quebec and is the Director of the Summer Music Academy at the Ferme de Villefavard in France.

Fuks has served as jury member in numerous international competitions. He was featured in The Strad Magazine of March 1993 and was appointed an Honorary Member of the Royal Academy of Music in 1999.

Professor Fuks is regarded as one of today’s finest violin pedagogues.