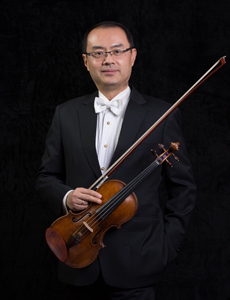 The distinguished Chinese-American violinist, William Pu, has served in key roles for two of the premiere orchestras in the United States. For the past twenty-five years, Mr. Pu was the Assistant Concertmaster for the Houston Symphony Orchestra and the Associate Concertmaster for the Atlanta Symphony Orchestra. Born in Shanghai, Mr. Pu graduated from the Shanghai Conservatory of Music before coming to the United States. He studied with renowned teachers like Fredell Lack, Camilla Wicks, David Cerone, and Emanuel Borok. Mr. Pu was the National Winner of 1990 Music Teachers National Association Competition (MTNA) and has received many awards in national and international competitions.

Teaching has long been Mr. Pu’s passion. In 1989, Mr. Pu received the Dorothy Starling Foundation Scholarship to become a teaching assistant to Fredell Lack at the University of Houston. For many years in the summer, Mr. Pu was invited to teach at the Texas Music Festival, the Asian Youth Orchestra in Hong Kong, the Harpa International Music Academy in Reykjavik, Iceland, and continues with the National Taiwan Symphony Orchestra (NTSO) International Youth Orchestra Camp. His students are now in many professional orchestras and top music schools in the United States and abroad.

Since 2014, it was due to his love of music and deep commitment to provide educational opportunities for young musicians, Mr. Pu and his wife, Amy Chang, have founded following educational institutions in Atlanta:

In 2019, together with his wife Amy Chang and long-time friend Mrs. Wei Lin, Mr. Pu co-founded the Atlanta Festival Academy. The AFA was successfully launched as an international platform of music collaborations and performances for young musicians around world.

Mr. Pu has been awarded as a recipient of the “Outstanding Georgia Citizen” by Secretary of State of the State of Georgia, Brad Raffensperger. Mr. Pu received the certificate of appreciation from the ambassador Roger Wise at the Opening Ceremony of the Inaugural Atlanta Festival Academy on July 21, 2019.

Mr. Pu was proclaimed by Mr. Wise to receive the award, given to Georgians who go above and beyond in their dedication to the well-being of the state. The award certificate text captures the nature of the honor: “May this Outstanding Citizen be afforded every courtesy as a Goodwill Ambassador from Georgia in his travels to other states, to nations beyond the borders of the United States of America, or wherever he may hereafter travel or reside. Thank you for your service to our State.”